EnVita.one is a plattform connecting a bundle of apps for different user groups in the field of occupational healthcare. Employees can have insight into their medical data, make appointments and plan their future examinations. Employers can overview the process of occupational health and safety management. And most important, occupational medicines can do everything in their application, from planning over examining to adjudging. Even diagnostic devices can be connected.

EnVita.one is a plattform connecting a bundle of apps for different user groups in the field of occupational healthcare. Employees can have insight into their medical data, make appointments and plan their future examinations. Employers can overview the process of occupational health and safety management. And most important, occupational medicines can do everything in their application, from planning over examining to adjudging. Even diagnostic devices can be connected.

EnVita.one is a startup founded by SAmAs, a software company running the standard software for occupational healthcare in German speaking Europe. The software launched in the mid 90's and since then has grown significantly, so it was time to create a new concept. One of the key values of this concept was to put employees at the center of attention and to give them the opportunity to take a vital part in the process of occupational safety and healthcare. The whole topic should be visualized as something not just mandatory but as a process of care taking for the employees with easy data access for every user group.

These values should be represented using a new logo. Not only the pretty obvious shape of the stethoscope symbolizing the field of occupational and general healthcare is part of the new logo, but also a heart divided into the initials E and V symbolises the act of taking care for the human needs of employees. This heart reappears in the mini logo while the "1" also symbolises the employee as a human being standing in the center of the whole process.

The construction of both logos is based on the same grid system and consists of the same basic graphic elements. The circles und rounded corners aim to make the application and the whole topic of occupational healthcare more friendly and approachable.

Use of the logos

The typographic logo of EnVita.one and the iconic mini logo are not meant to be complementary to each other but substituting. The mini logo will be used where it can stand for itself not needing any further explanation (e.g. as a starting icon for the apps, on the backside of business cards etc). Wherever the brand has to be introduced, the typographic logo appears making sure the user knows who he's dealing with. 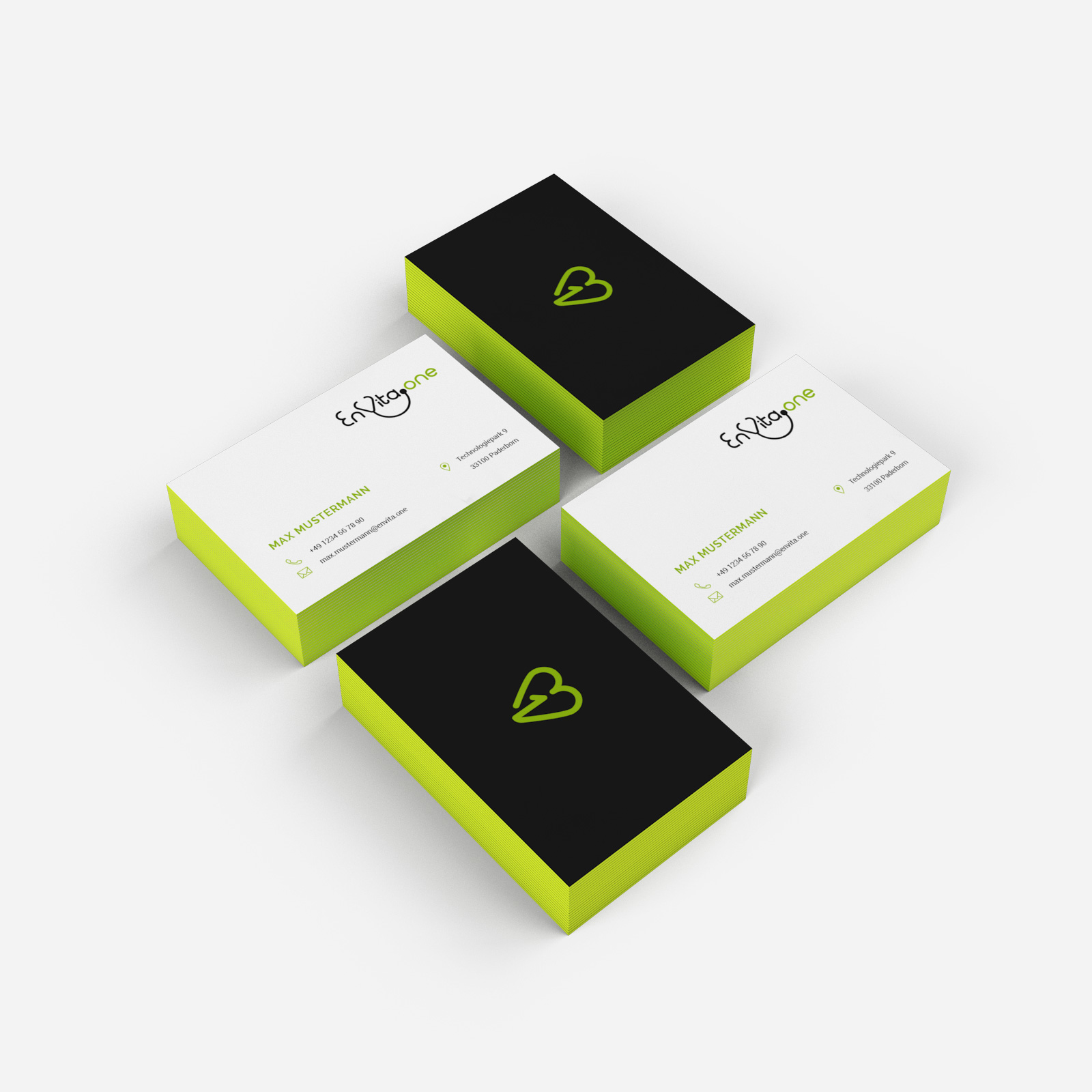 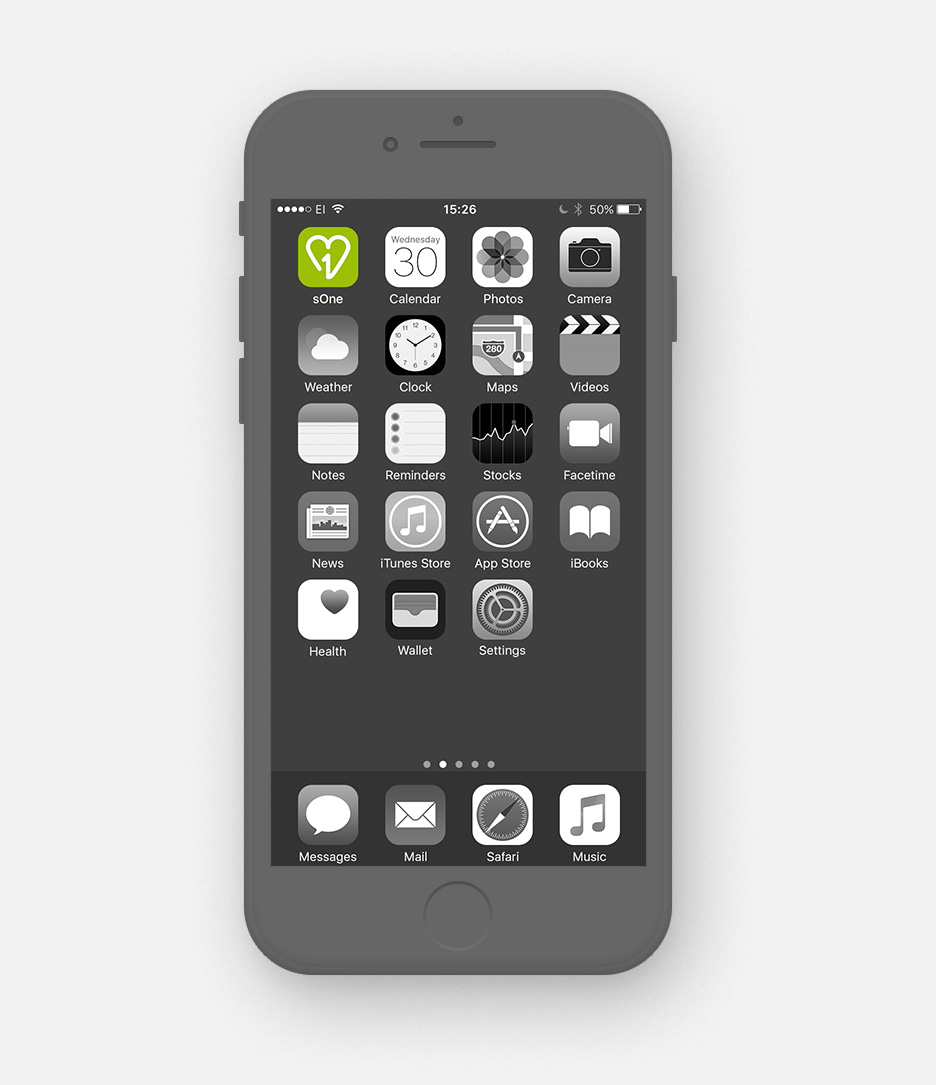 The design of the apps started with a huge set of custom made icons. Rounded corners and bold lines were the way to go in order to give the applications a modern interface and reference to the logo. Iconography plays a big part since there are countless special functions and topics which are strongly related to the field of occupational healthcare. We tried to find icons for almost every function and area of the apps. This was also one of the main objectives in terms of usability and intuitive user guidance. Some icons existed in the old application, so we had something to build upon. Previous users of the old application should feel familiar using the new apps and find their way around as quickly as possible, therefore the old icons have been redesigned without changing the content or symbols. Many new icons have also evolved and now the icon font consists of more than 130 icons.

Color choice was a big topic since while the existing colors should be kept in order to not completely rebrand the whole experience, some of them didn't really work. The main color, EnVita.one Green, was much too bright to work as a signal color on screens. So the biggest color decision was this one. Based on the new EnVita.one Green all the other color choices were made. We had to make sure that they were also strong colors since they represent states and areas in the app and are also used in infographics. Therefore they had to be clearly identifiable.

The fonts had also been chosen and used before. I developed a clearly and distinctly working typographical system.
EnVita Green
#9CC006

Of course the web applications are designed responsive, but for most native applications there is something like a natural habitat. Occupational physicians will work in their office, most likely on their desktop computer or maybe on a tablet. Probands on the other hand just want to check their data, make appointments or fill in surveys, therefore their app is designed as mobile. However most apps are still responsive to a certain degree, making it possible to run them on similar screen classes like mobile and tablet. 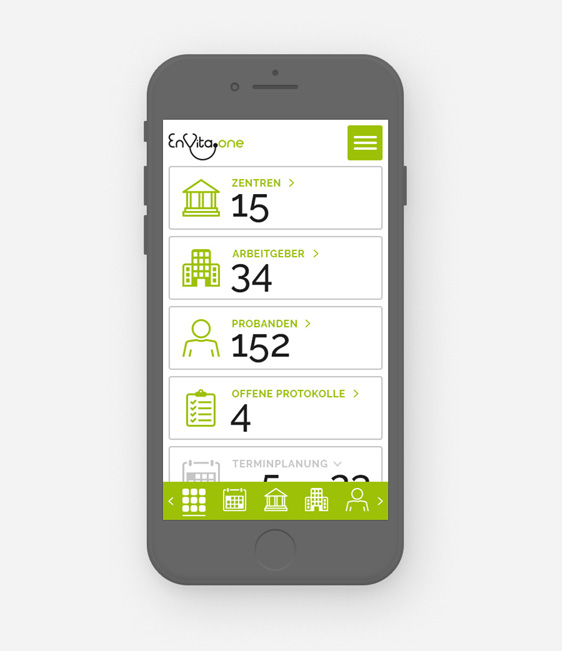 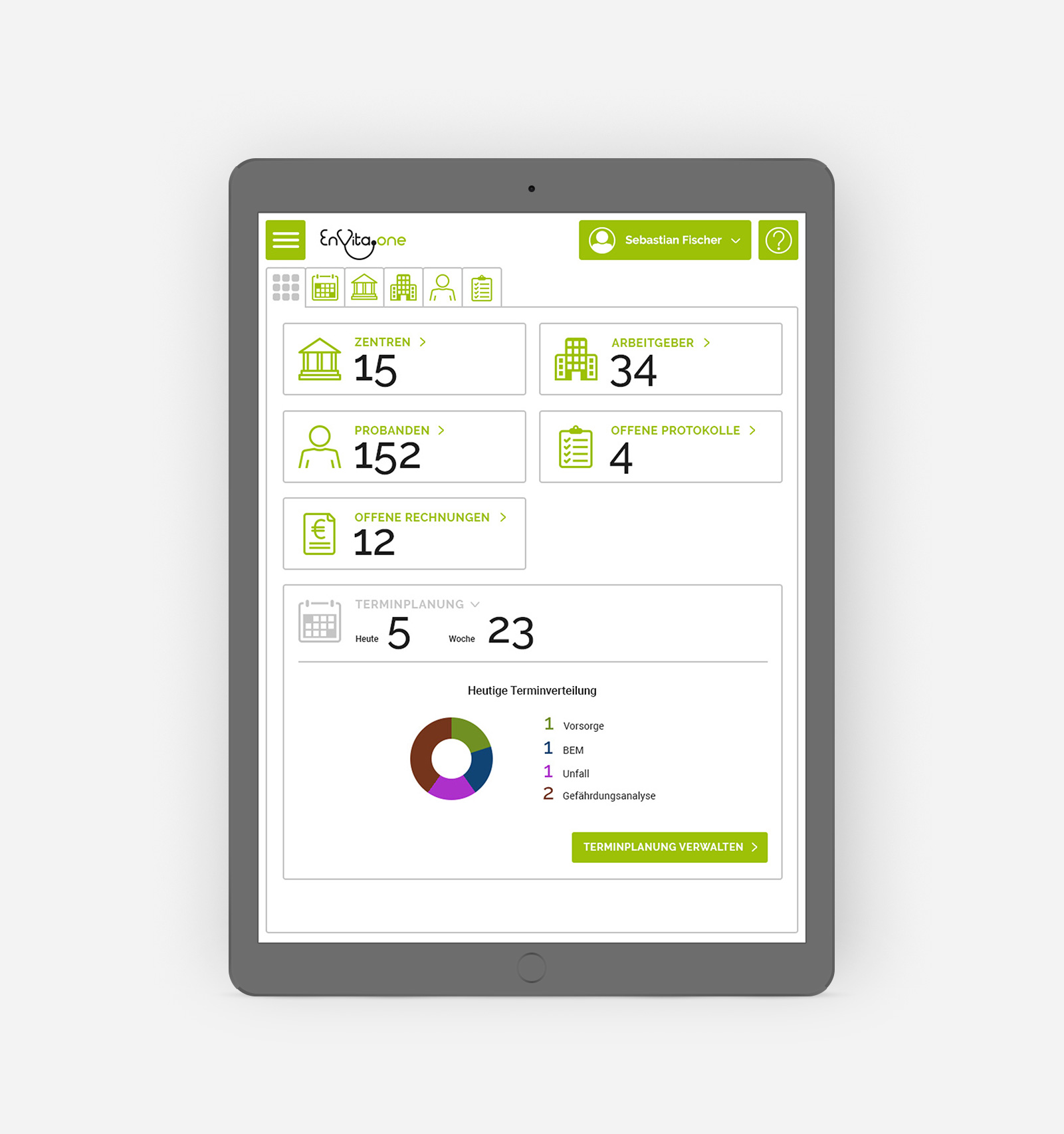 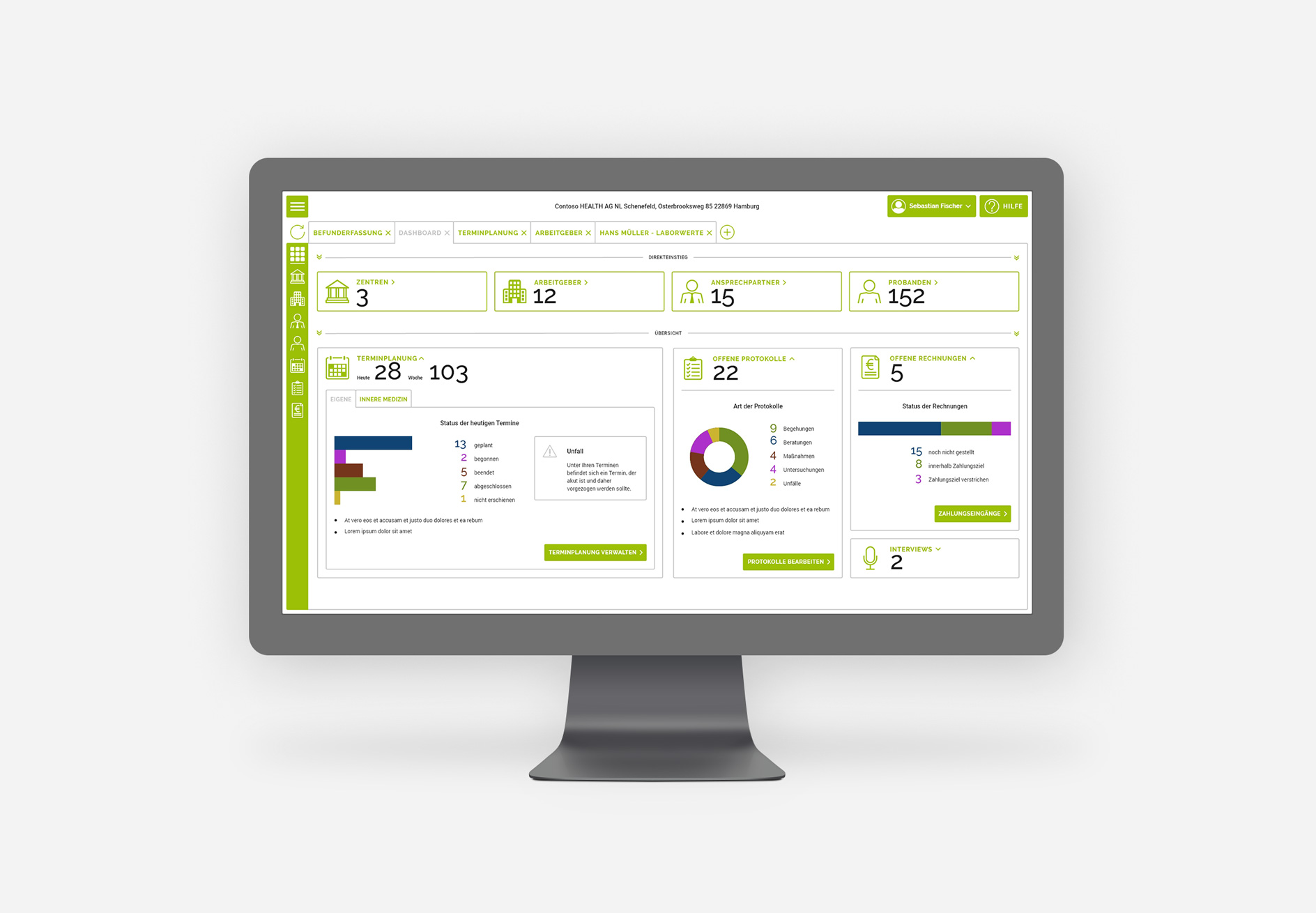 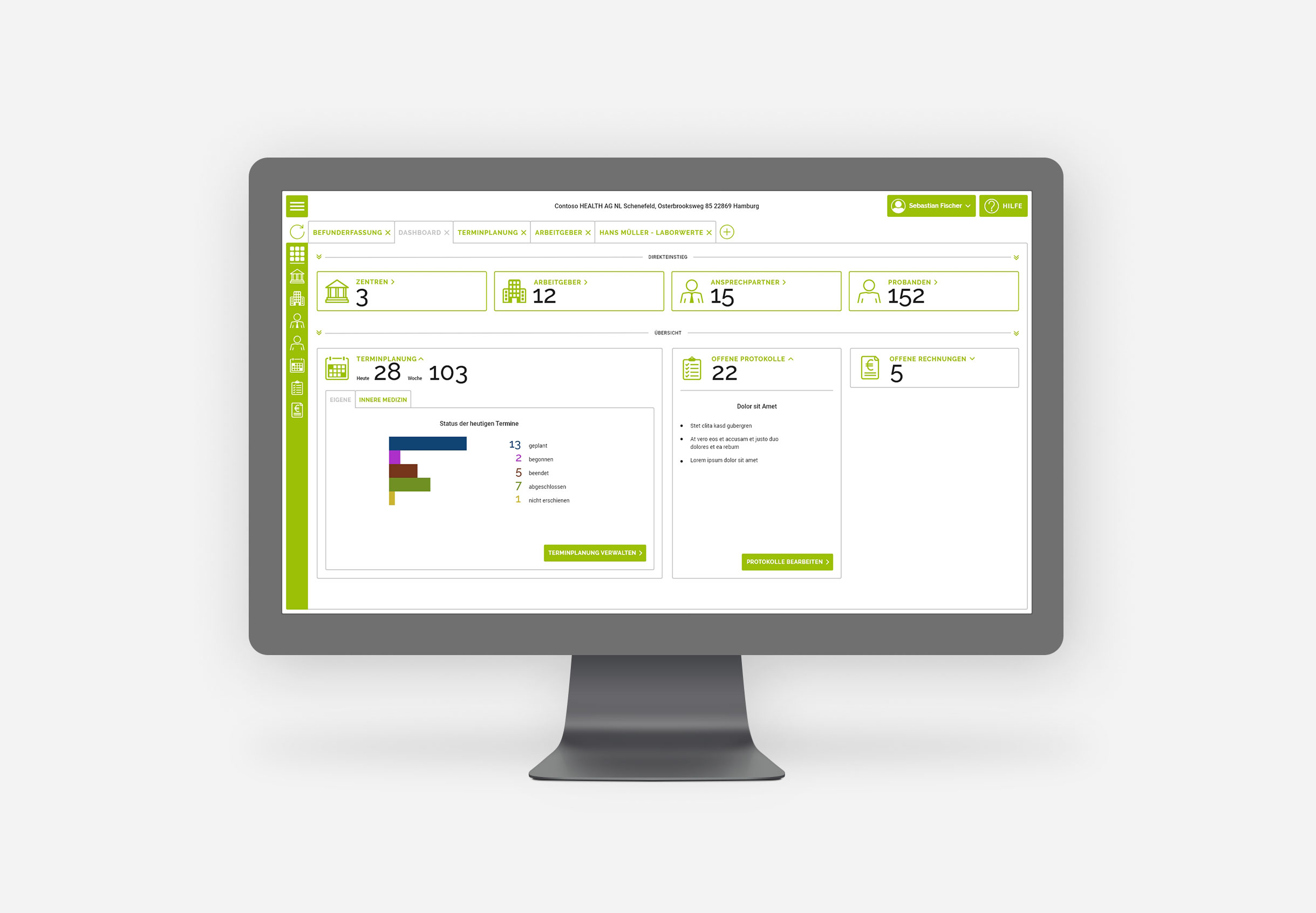 So I supported the team of developers in ux/ui design from the very beginning. While the product had already been launched the whole project is still in progress. We constantly develop every aspect of the whole user experience, improving designs and adding new functions and areas to the applications. It truly is a long term project since the range of functions is huge, especially working with a mid-sized team of devs. Many central components have been designed and implemented already, especially for the most important application of the bundle which is the desktop application for occupational physicians called sOne. 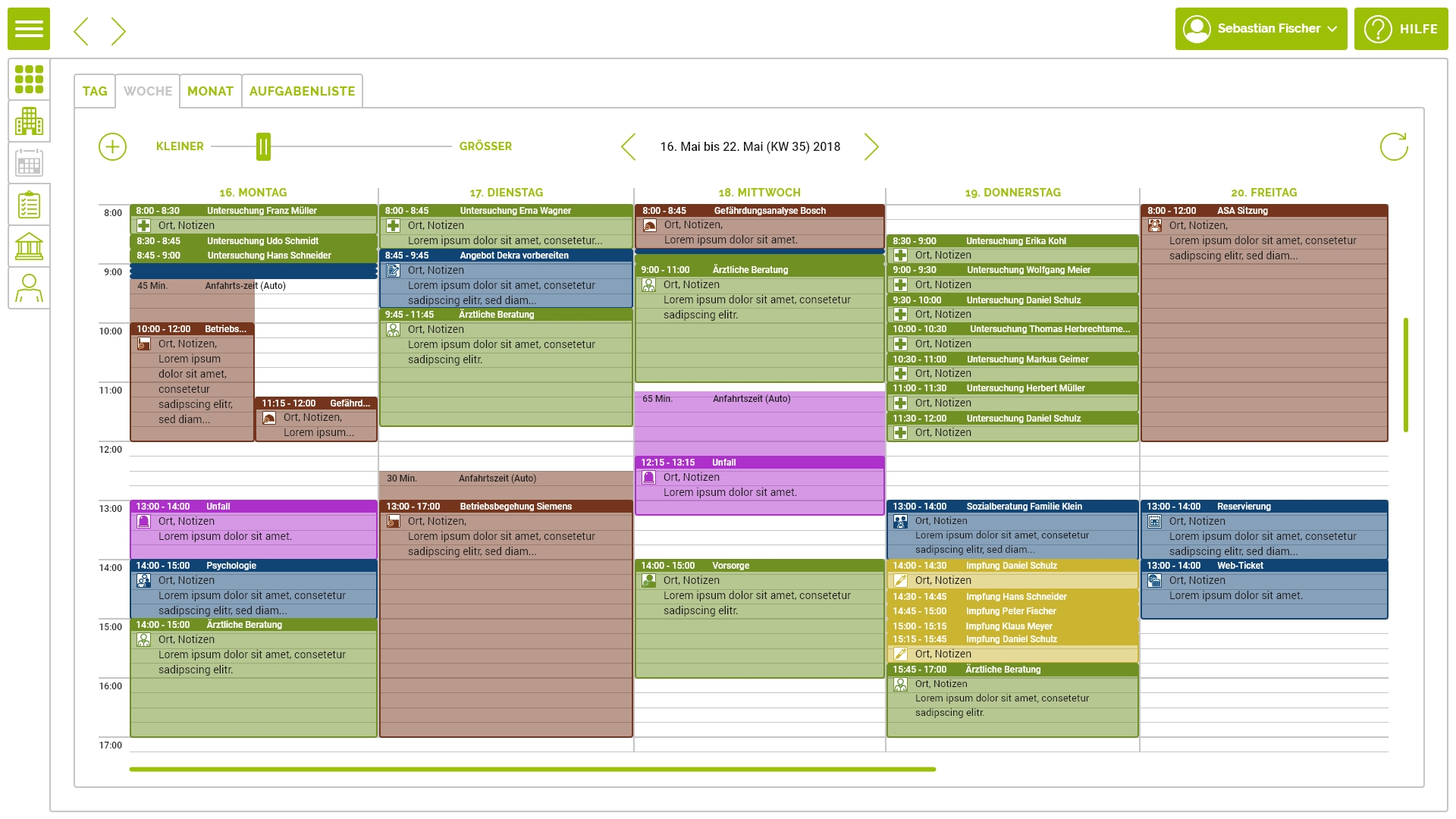 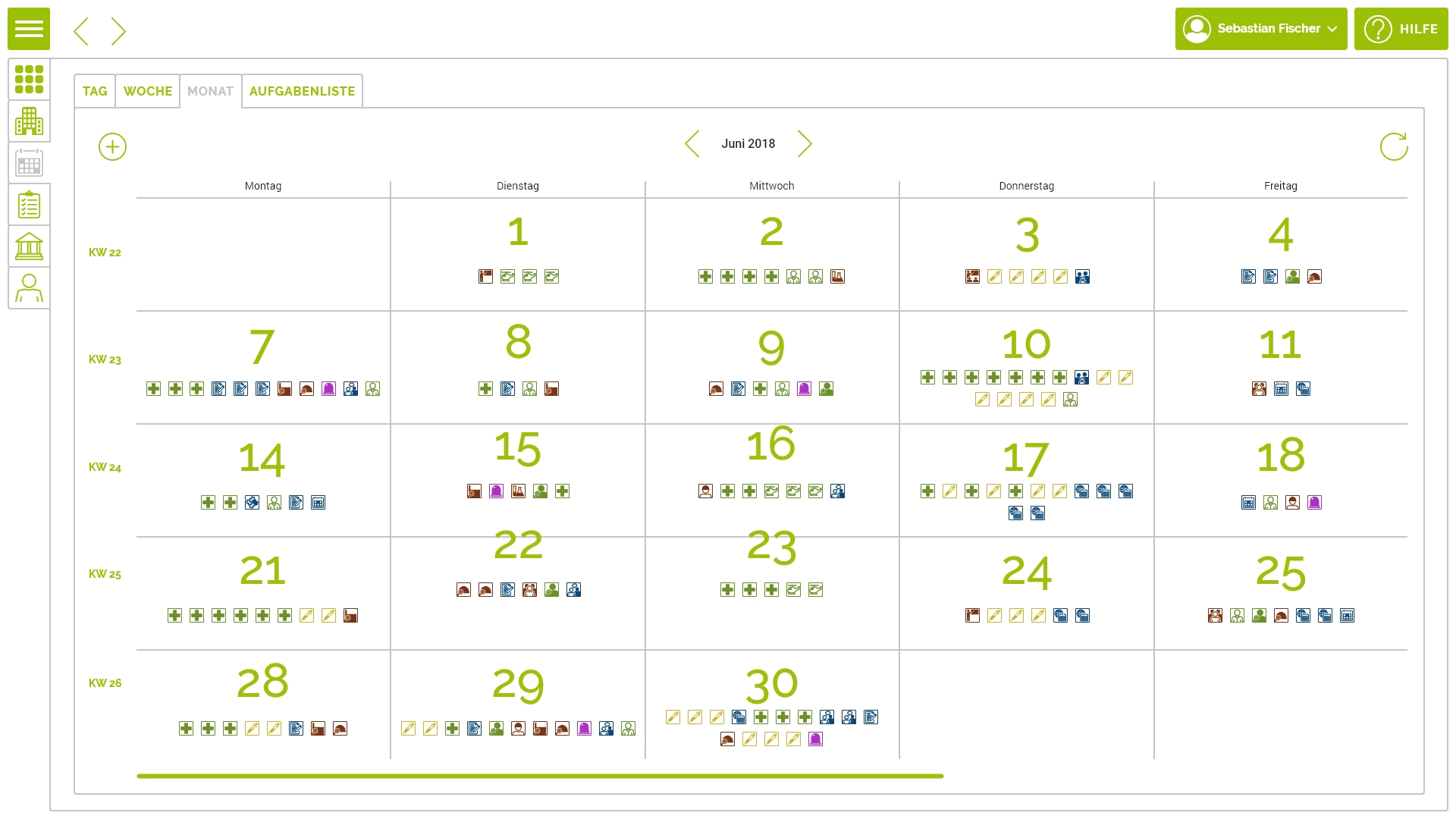 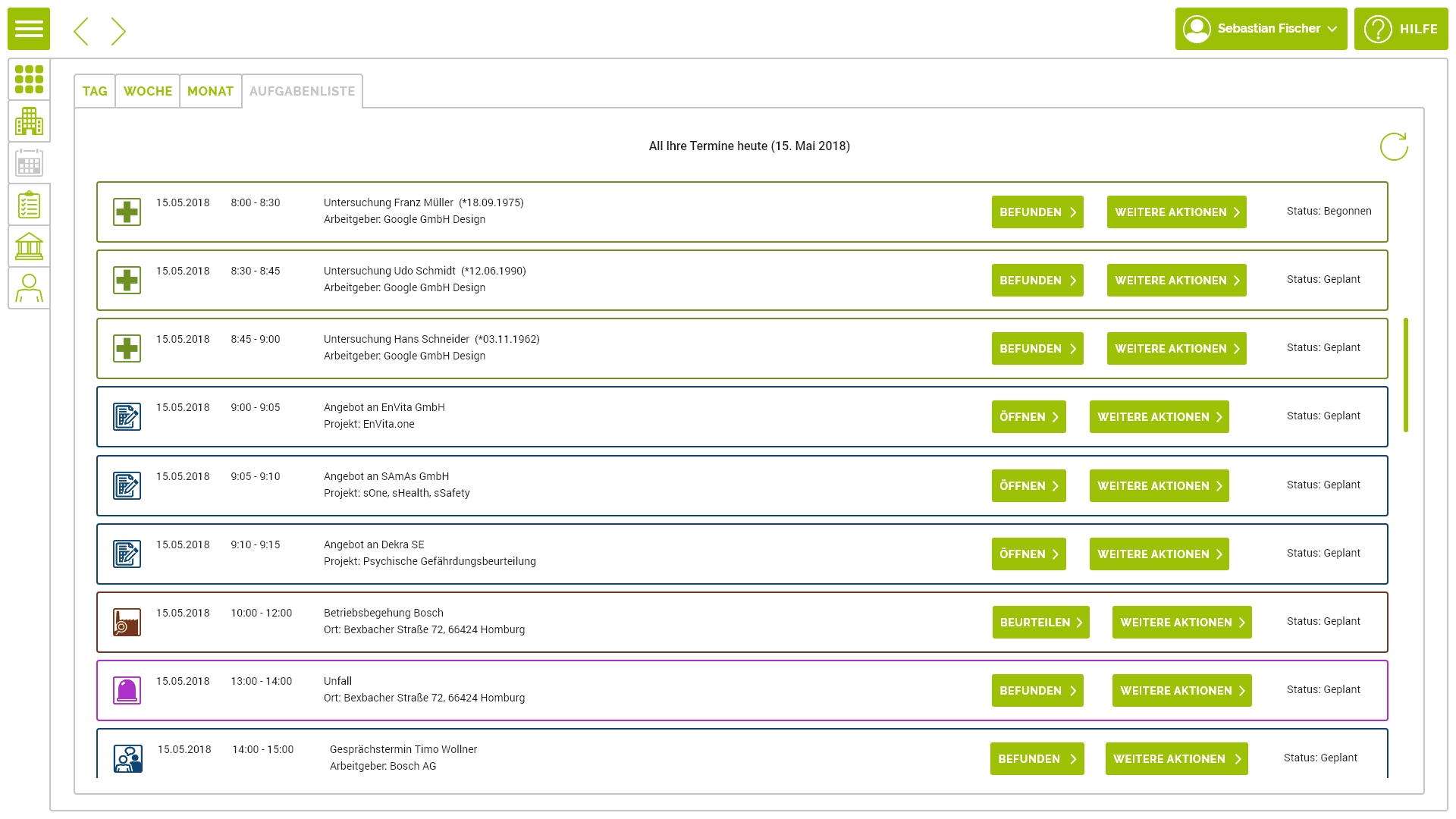 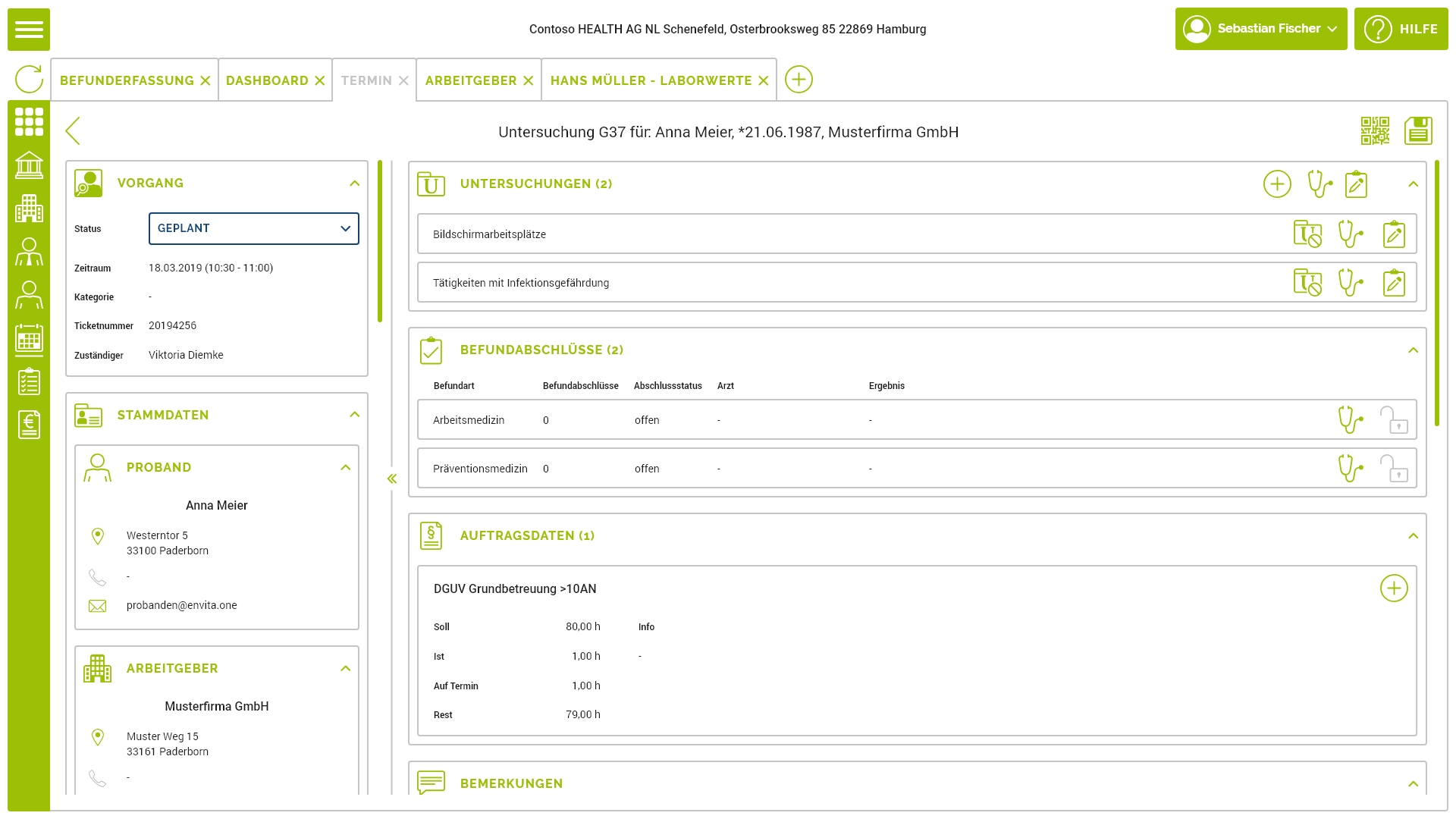 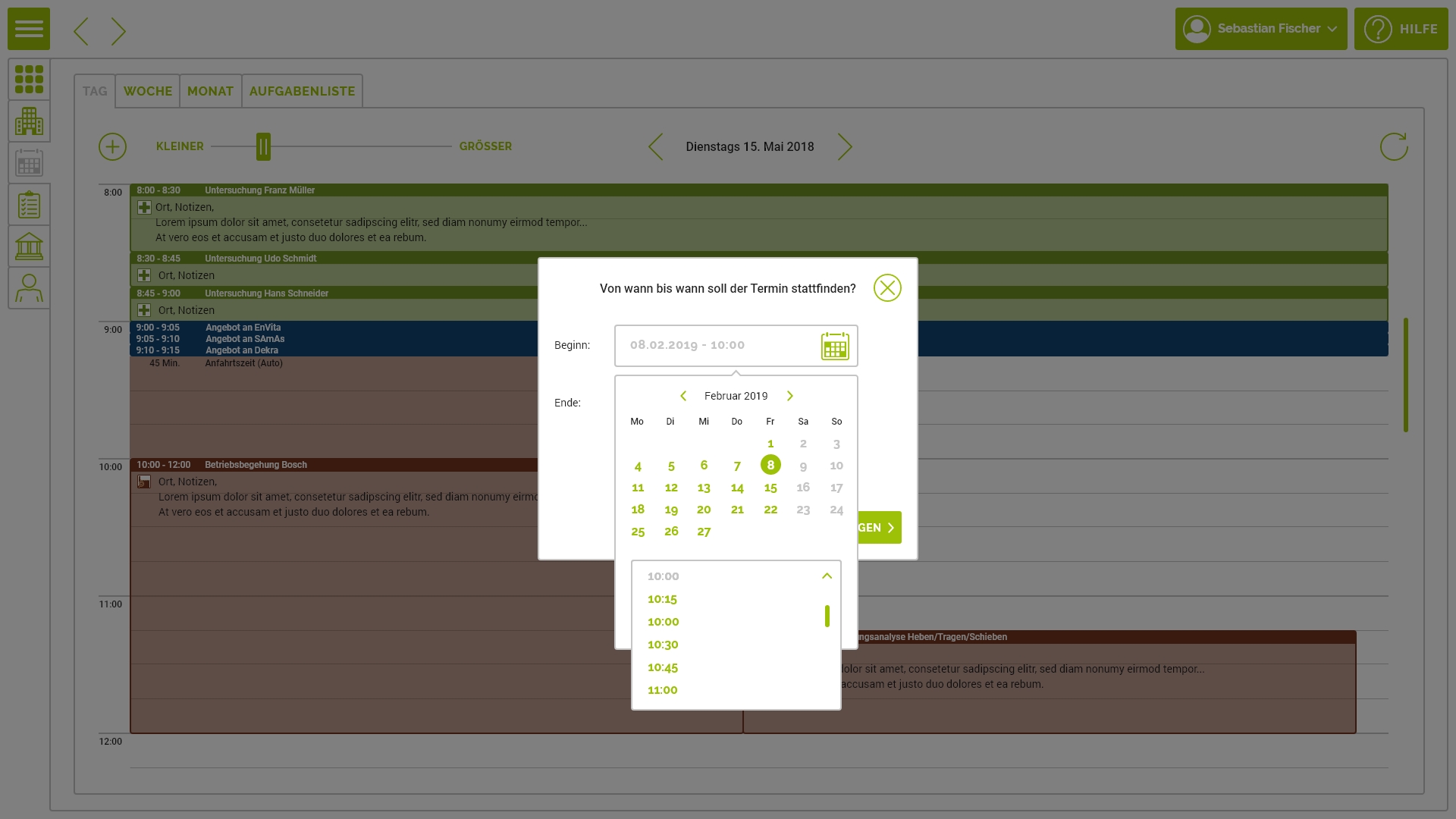 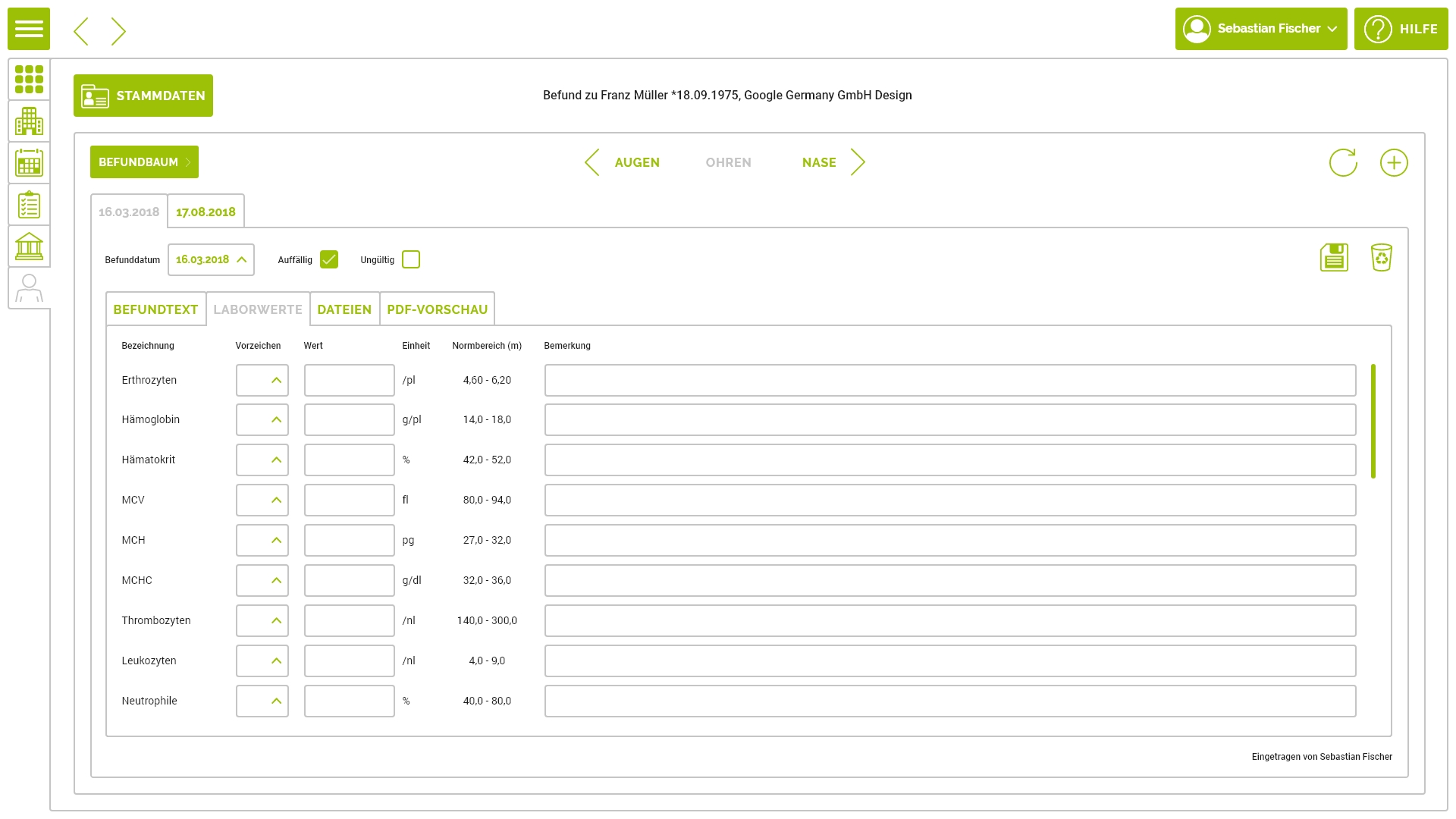 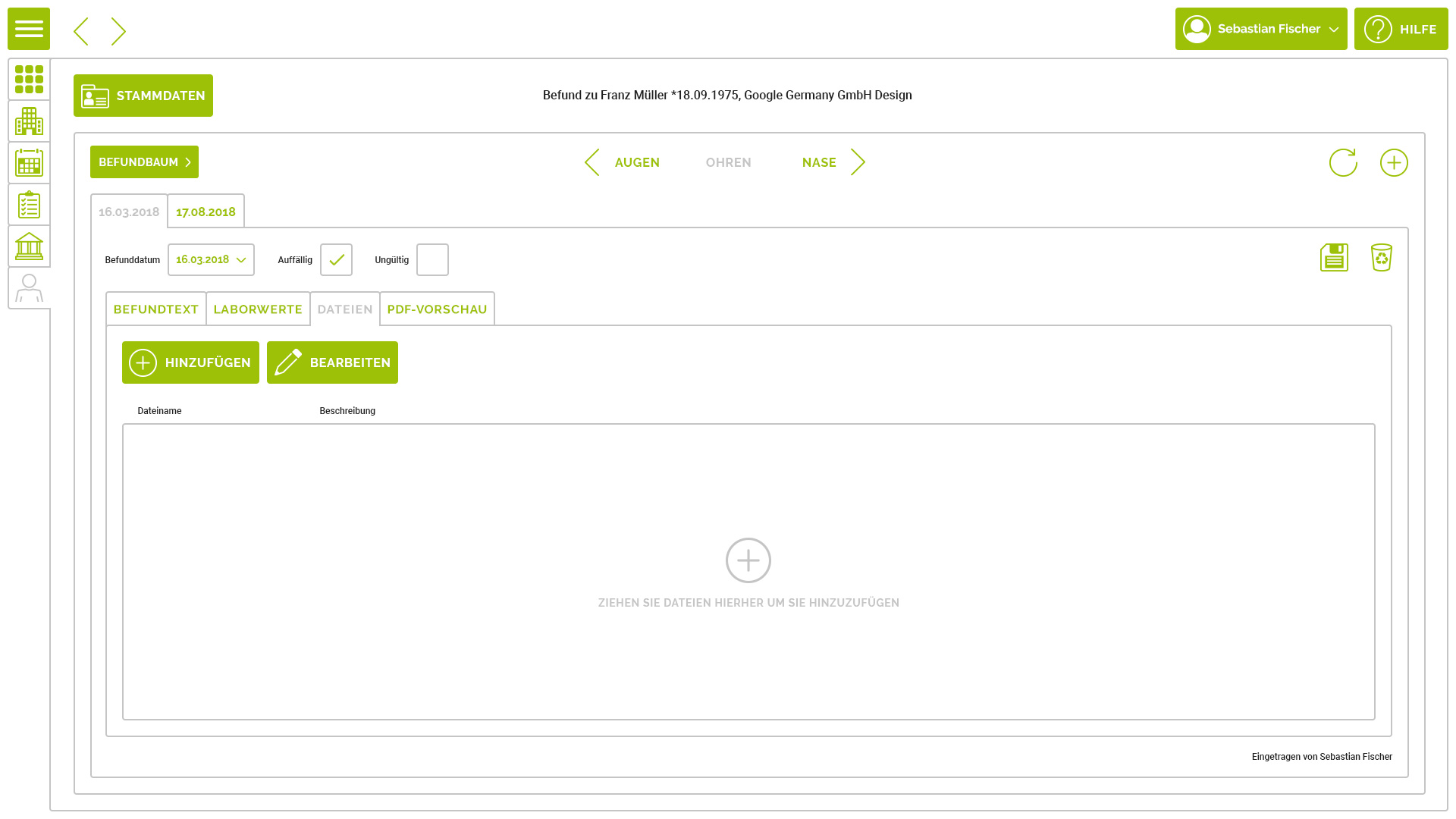 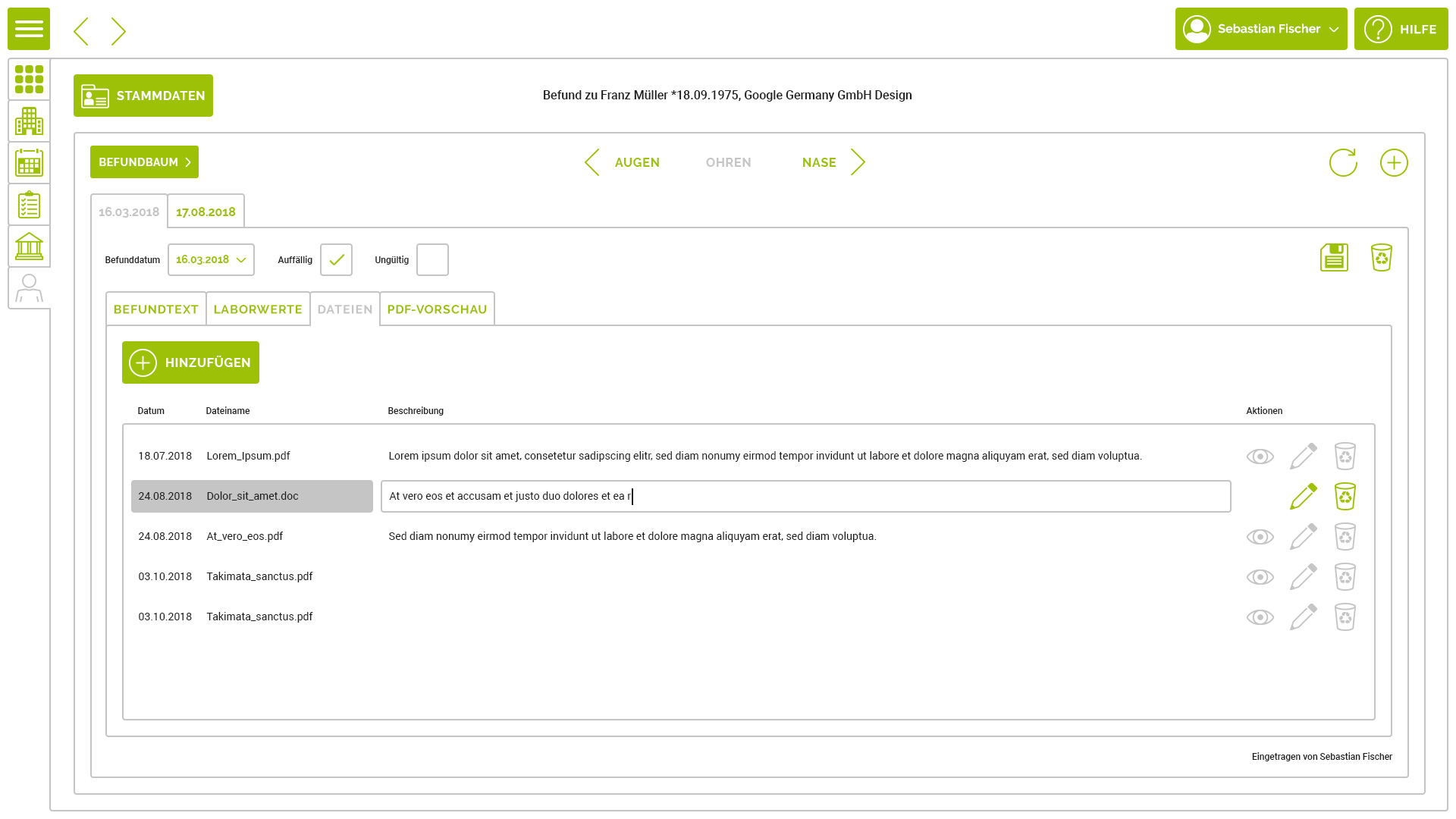